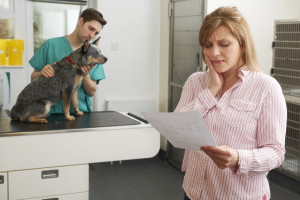 A new study has revealed that over a third of pet owners across the UK are giving their animals human medication in order to avoid expensive vet bills.

A shocking 1.4 million people admitted that they have risked their pets lives by giving them anything from anti-histamines, paracetamol, ibuprofen, aspirin and antiseptic creams. Unbelievably, some say that they have even given their furry friends protein shakes, vitamins, exercise supplements and diet pills.

What comes as an even bigger shock is how often people are committing these potentially life-threatening acts. On average, owners said that they have given their pets human medication seven times in the past 12 months.

Of the 1,000 people who were surveyed, 21% said the reason they did this is because they didn’t think the injury or ailment justified a trip to the vet. Anything from injured paws to cuts and insect bites see people self-medicating rather than taking their pet to see a professional.

33% said that they feel compelled to give their cat or dog some form of quick pain relief after seeing them suffering and 27% mistakenly thought that it was perfectly safe to give animals over-the-counter medicines.

The survey was carried out by pet insurer, MORE TH>N and highlights the importance of pet owners seeking professional advice rather than guessing what might or might not be safe for animals. Pet Claims Veterinary Consultant for MORE TH>N, Andrew Moore commented:

“By giving their pets medicines designed for humans, owners risk significant harm to their animal’s wellbeing. Issues like liver failure and kidney damage are among a litany of potential health complications that arise from seemingly harmless over-the-counter products.”

If your pet is ill or in pain, please ensure you take them to the vet where they can give them proper treatment and medication which has been designed especially for animals. Whilst vets do occasionally use forms of human medication in the treatment of animals, there are a number of conditions that come with this:

Even seemingly harmless vitamins or supplements should never be given to an animal. Pets can react badly to protein powders, diet pills, caffeine pills and even natural vitamins. Cats and dogs have different dietary requirements to humans and may respond poorly to being fed artificial protein and other exercise supplements.

Another thing worth bearing in mind is that often, by taking things into your own hands you can make things worse. This means that by trying to avoid paying vets fees, you could end up with an even more expensive bill than if you had just taken them to the vet in the first place.