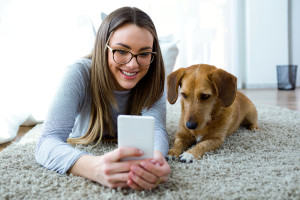 It’s a well-known fact that Britain is a nation of animal lovers but new research carried out by tails.com has revealed a rather surprising fact.

It has found that nearly half of all dog owners talk to their beloved pooch more than they talk to their partner. What’s more, a further 40% of owners who were questioned said that they’re more likely to share a secret with their pet than anyone else.

It would appear as though we’re also saying more than just the odd word here and there. The study found that on average, owners spend 47 minutes every day talking to their dogs. 81% of respondents said that they felt happier after doing so and 65% even admitted that their dog is their best friend in the whole world.

Perhaps this is because 86% feel that their pet is always there for them when they need them and an incredible 94% said their dog never fails to cheer them up when they’re feeling down.

Confirming just how much our furry friends mean to us, nearly every single owner questioned (96%), said they see their dog as part of the family and not just as a ‘pet.’

“We are a nation of dog lovers and we clearly value the individuality, companionship and friendship that our dogs provide.”

The survey also found that we love our dogs so much that they’re our number one choice when it comes to who we want to take selfies with. The average owner takes six selfies with their pet every week which is more than we do with our partners, friends and even children.

The benefits of pet ownership have long been promoted as countless studies have found direct links between having a pet and enjoying better physical and mental health. It’s not just dogs who are good for our health either as the charity, Cats Protection found out in their latest survey.

Their research found that owning a cat when retired can be hugely beneficial to our health and has a number of positive effects on our wellbeing during the later stages of life. Kevin McMullan, head of pet insurance at Saga commented:

“Retiring can be a shock to the system as you lose your routine when you stop working. Our research shows that many of the Saga generations think that entering retirement can be the perfect time to get a pet. As well as helping to restore a routine, owning a pet can give a boost to your health and be great for your social life.”

Pets have also been known to provide a number of other health benefits including reducing stress levels, speeding up recovery after an illness, reducing blood pressure as well as cholesterol levels and unbelievably, they can even make us less likely to suffer from a heart attack.

Taking all of this into consideration, it doesn’t come as a huge surprise that in 2015 the UK’s pet population was estimated to be around 20 million. With one in every two households owning a pet, it’s official, we really do love and depend on our furry friends.