How to manage conflict in the workplace

Spending nearly 40 hours a week confined to a small space with the same people means that issues between colleagues are bound to occur. While workplace conflicts aren’t uncommon, it is important to deal with them quickly and effectively otherwise it can lead to serious long-term problems.

The Monster website has some good immediate advice if you are having to deal with a situation at work: https://www.monster.co.uk/career-advice/article/how-do-i-resolve-conflict-with-a-colleague

The ability to recognise conflict, understand the nature of it and create a swift resolution is part of the job for anyone in a leadership role. Whether it’s arguments over who’s not pulling their weight or two employees have an almighty personality clash, there are some conflicts that that are common in the workplace. Read more on the HR Zone website: https://www.hrzone.com/community/blogs/bp/5-most-common-types-of-conflicts-at-workplace

So what do you do when your team is at loggerheads with each other? 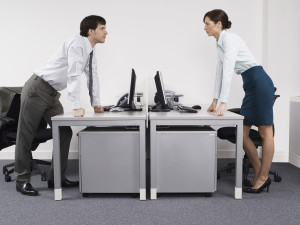 When you have 100 things on your to-do list, it can be very tempting to brush conflicts under the carpet. While pretending nothing’s wrong may serve you well for now, as time goes on, tension will build and the conflict will only get worse.

Try to deal with issues as soon as possible because the more stressed out colleagues get with each other, the more likely the problem is to escalate. This could result in people taking sick days to avoid seeing each other, productivity declining, stress levels increasing and people quitting their job. Remember, it’s not just those involved with the conflict that will be affected either, serious conflict can also have a knock-on effect on everyone in their vicinity.

Set up a meeting

Whether it’s an individual who seems to have conflict with pretty much everyone in the company, two colleagues who don’t get on or teams who can’t seem to work together, set up a time to talk to everyone involved.

This should be done somewhere private so people feel it’s a safe envirnonment to be honest and everyone should have their own time to share their feelings. It’s usually a good idea to talk to everyone on an individual basis initially as this will give everyone a fair chance to speak up.

Once you have a good idea of what’s going on, bring the individuals or groups together so you can come to a resolution. Spend this time looking for agreement rather than focusing on the negatives. For example, can they think of times they’ve worked well in the past together or is there a compromise everyone is happy to agree with? 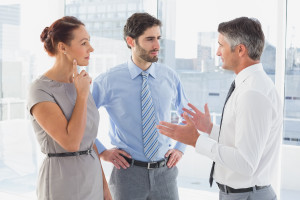 Ask questions so you can clarify and understand exactly what the problem is. Focus exclusively on work issues and leave individual personalities aside. While it is important to listen with empathy and objectivity, make it clear that you won’t take sides and that a resolution needs to be found.

If it’s clear that the issues are occurring because of conflicting personalities rather than specific work issues, remind the people involved that it’s unprofessional and unacceptable to allow personality clashes to affect the workplace. If it’s two team members for example, while it may be easy enough not to sit them next to each other, they can’t avoid working together completely.

If you’re really struggling to manage conflict between employees, mediation can help. By outsourcing this function, you’re not only benefiting from expert advice, staff may also find it easier to open up to someone who is completely unbiased about the situation and the people involved. Contact a professional leading conflict management consultancy like TCM for further help and advice.

Mediation can help to repair and rebuild relationships as well as transform the culture of your organisation into one that views conflict as an opportunity for consensus, growth and development.

← IT downtime is costing UK businesses £3.6 billion every year
5 ways landlords can protect their properties from damage →