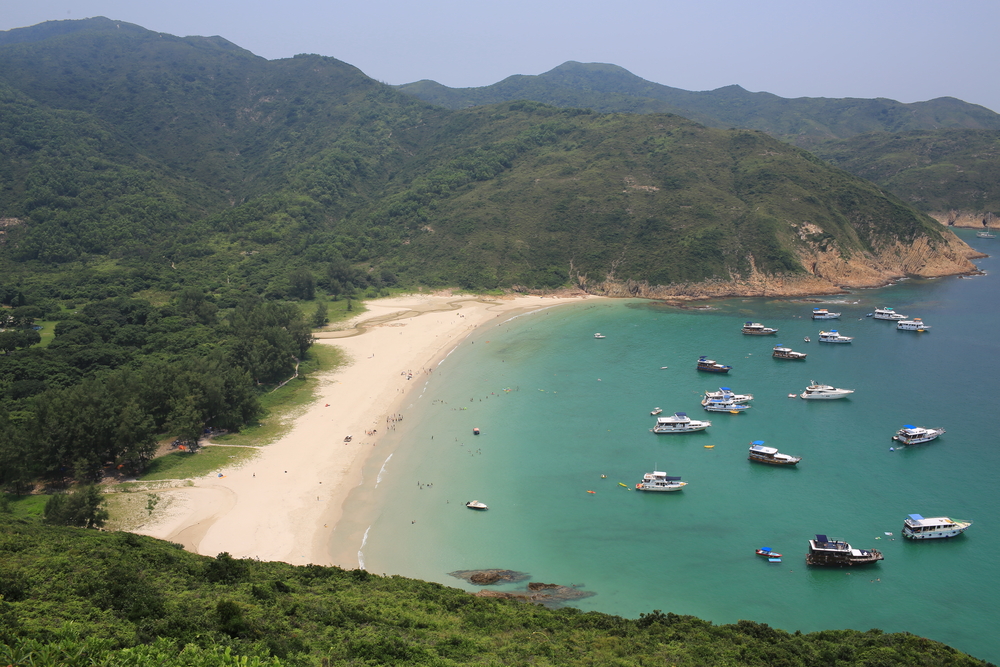 Recently I was lucky enough to go back to Hong Kong, a place I had not visited for many, many years when I lived there in a former life.  As soon as I got off the aeroplane and chewed the air, coughed a few times and felt the delicious warmth of the summer sun – I felt instantly at home.

Nearly all the images of Hong Kong depict the towering blocks of Central (the Business district and playground of the Western companies) or Kowloon, the more Chinese and Asian equivalent. However those who know and love this country appreciate that over 75% of Hong Kong SAR is green, open spaces of outstanding natural beauty. You can walk for several hours from The Peak at the centre of Hong Kong Island to the coast without seeing a single dwelling up close. Only 4 of Hong Kong’s 263 Islands are really inhabited and if you were to visit Sai Kung in the New Territories, you would walk into the hills and be lost for days, as you can see from the picture below.

Hong Kong is a very curious place where I lived for 7 very happy years.  It used to be known as the gateway to the East, not just in terms of business, it is equally a place where East meets West in terms of culture.

However, of my countless wonderful memories one I had forgotten was the bamboo scaffolding. Of course, I remember being shocked and amazed when I first saw them, but after a while the miles of bamboo cover a 70+ storey building erected on the edge of a cliff, simply blended into the fabric of our new world.

Seeing these vast structures covered in scaffolding made entirely of bamboo, held together with what appears to be cable ties just seemed normal. Yet it always made me chuckle that the scaffolders, known as the “Spidermen” or simply “Spiders” never appeared to wear a harness, often shirtless and bare foot, considered that the only safety equipment they needed was a hard hat and rubber gloves – yes like the ones your mother used to wear to do the washing up! My Cantonese was never good enough to ask why they chose a hard hat for protection rather than a harness, and to be honest, if I had managed to splutter my way through the tongue curling words, I would never have been able to decipher their answer.

The Chinese firmly believe that bamboo scaffolding is stronger and safer than our metal equivalent, especially during the typhoon seasons, where swirling winds can reach hundreds of miles per hour and the tower blocks swayed constantly from side to side. Their view is that it is this flexibility that means that in severe weather their structures will remain in place. However, I do recall many occasions after a T8 or T10 typhoon, there was often bamboo poles on the ground.

Watching the men and women put up the scaffolding is an extraordinary sight as this video explains.

It is a very dangerous profession, however they still view hard hats as essential. The South China Morning Post claims that although falls are exceedingly rare, head injuries were not, in fact, they viewed that most falls were precipitated by being knocked on the head.

Hard hats have been around for over 70 years and work extremely well due to the very simple physics behind them.  Suspension bands inside the hard hat spreads the helmet’s weight and the force of any impact over the top of the head. The suspension band also provides space of approximately 30 mm (1.2 inch) between the helmet’s shell and the wearer’s head.  Therefore, if a bamboo pole hits them on the back or top of the head, its force is unlikely to be transmitted directly to their skull. Mind you, given that some of the Chinese scaffolders are 50 storey’s in the air, I would still rather like to have a harness if it were me!

Recently, the Spiders have started to use metal poles, however, as East meets West, the do not use them in the way the scaffolders would in the UK, as a replacement for their Bamboo; oh no, they use them as a little bit of extra bracing, attached to a bamboo pole so that they can build higher structures!

← Mobility Scooters – Three cheers for Top Gear
A summer garden to be proud of! →